Please fill in the form below to receive a prompt quote.

Traditionally presses have de-rated tonnage capacity for blanking. Depending upon manufacturer this can be as much as two thirds of the forming capacity rating of the press.

By adjusting the hydraulic shock damper control valves to capture 100% of the reverse load may generate a nominal 3-5% additional forward load tonnage, resulting in 95-97% of the forming tonnage available for blanking.

The result is the ability to run heavier jobs in smaller presses, requiring less capital investment.

Back to 7 reasons to use hydraulic dampers » 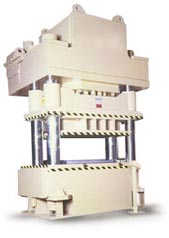